If I had to define Modular architecture in one phrase, I would say that modular housing is basically the prefabrication of self supporting modules in a factory, that are then easily (and quickly) stacked on top of each other and plugged on site. From this idea, things can get more complicated and design can be quite sophisticated. Still, this way of building is simpler, faster, cheaper, more efficient. But how about its quality?

I definitely have a problem with modular housing. I am not sure why but there is something in me telling that it is wrong, that it is not Architecture. Maybe it is because it feels like a finished product, that can be indefinitely reproduced, that you buy at a store and set on your plot in a blink. But then you could say that copying my typical plan from one floor to many others is already making some repetitive impersonal design… Maybe it is because the building process is completely detached from the site, as if design didn’t have to change when inserted in its context. Maybe it is just because I didn’t know much about it. So I decided to go to this event organized by Urban Green Council to learn more.

Roger Krulak, Senior Vice President of Brooklyn Navy Yard based FC Modular knows his deal of modular systems, as he builds them. With charts and statistics, he explains how this system is cheaper and more efficient: less construction waste, safer work conditions, lower neighborhood impact with ten times less people working on site and half less truck traffic (compared to conventional building). 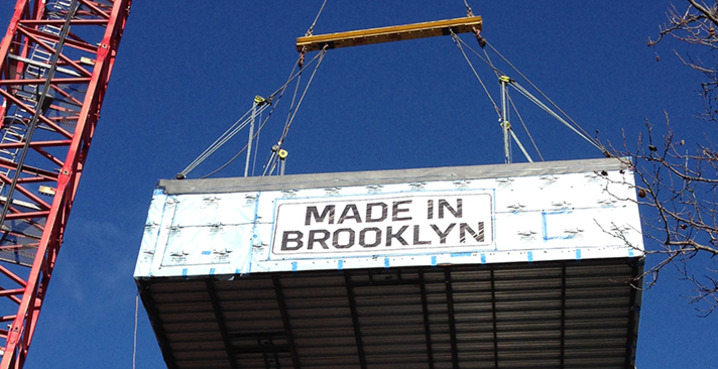 As for James Garrison, Principal at Garrison Architects and teacher at Pratt Institute, he started to use this system as a plug-in architecture […] Humane and sustainability potential is what interested [them] at first. Because construction productivity has been falling since World War II (who knows where that came from?), we need to learn how to build efficiently. He then shows a few case studies:

This last project won a merit award at the 2015 AIA Awards. Every utility is included within the module itself. The transition from architectural to shop drawings is critical as everything needs to be designed, anticipated, coordinated in advance. There is no second try: the day they are stacked on site, the modules must fit perfectly. Because everything is prefabricated, there is no error margin. For this last project, there was questions from the city about how to serve these units (utility-wise). Also, it was supposed to be temporary but people like it and want to stay.

Then came the Q&A:

Modular Housing is a good option to achieve mayor’s goal of building 250,000 affordable housing units within the next 10 years. The City Permits have been easy to obtain, confirms James Garrison.

When asked why this building system has been around for a while but is still not that common, Roger Krulak explains that modular housing involves a real change of method (…) a new way of thinking the manufacturing process. We are used to components but to work only with modules to assemble is a dramatically different way of building. As for the end of cycle, dissembling is not easy but possible, he says. We are not there yet (when compared to automobiles for instance). It is worth the try though. Modular housing is cheaper in terms of labor (everything is made up at the workshop) but can also achieve a better sustainability level for the same price. It is all about how to design and think the manufacturing process. The building process is so fast, there are huge time and energy savings.

When asked about the limits of the system, Roger Krulak answers that it is to be considered as a conventional structural engineering. It doesn’t act differently from any usual building. Echoing this vague answer, an other question tackles the constrain of the chassis size, which eventually works better for certain types of building (like affordable housing). James Garrison adds that in any case, it is a design process, a choice you have to embrace from the beginning. Well, I don’t know if I am ready to embrace it, but modular housing definitely has its good points. I am still skeptical about the design possibilities it offers though, as they seem limited. To me, designing modular housing looks like stacking nicely decorated shipping containers (bright colors when aimed at student housing); which can be quite simplistic to the beauty of designing space, flows and life. We might hear that it is just the building process that is different, happening indoor instead of outdoor. But they said the same about climbing, and every climber knows that there are two different experiences here, namely when the fall comes. Indoor is a good practice (as prototypes are necessary) but making your way up to the top has always been the real deal. That being said, efficiency, material savings and safety of modular housing are not to disregard. Maybe the system can achieve awesome architecture when we will have spent enough time and work on developing new ways of using a basic module. We did it with brick, so why not with a bigger piece?