I recently got the chance to meet – again – the Director of NYC Mayor’s Office of Sustainability thanks to an event organized by Building Energy Exchange through its Wise (Women In Sustainability and Energy) program.

The moderator starts with this alarming “fun” fact: the world population has grown by 65% in less than 40 years. The impact on food, energy, housing, and other resources is undeniable. Sustainability is not accessory anymore. And then this surprising statement: Women have always been important in the field of sustainability. As opposed to men? As opposed to other fields where women don’t want to get involved? Anyway, an interesting professional is invited on the floor, meet Nilda Mesa. 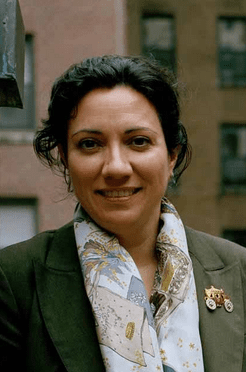 Nilda Mesa has been working at the mayor de Blasio office since December 2014 and is here to present the city’s different programs promoting sustainability. One of the main goals is to reduce by 35% greenhouse gas emissions by 2025, which by definition implies to work on “energivore” buildings. So a number of mechanisms and regulations are currently developed.

But the city also wanted to deal with power and transportation sectors. Because $600 to $650 million per year are spent on electricity, this is an opportunity for the city to save money on one hand, and to dramatically impact the sector on the other hand. So it started to buy renewable energy from the private market. We are looking for new sources to impulse into the grid of the city. As a big client, NYC can encourage investors and smart incentives.

It all started with a brainstorming between agencies to decide what NYC really needs for the next century. And several goals were overlapping between different agencies. For instance, the methane emission reduction goal led to the initiative of Zero Waste (to landfills) by 2030, implemented by organic waste pick-up, food waste treatment plants, which could eventually produce energy. BuildSmart NY, dealing with State buildings greenhouse gas emission reduction, is the result of another inner competition between agencies, this time to get funded. Between many projects, solar energy is a good strategy for a number of public buildings. Aside from regulation and community incentive, the city is working on management systems and launching pilots to test ideas.

An other important step is to realize that you can’t have sustainability if there is economic un-sustainability. That is why affordable housing and pulling New Yorkers out of poverty is as important as energy savings and waste management. More minor actions but still impactful are equality on Wifi access and transportation efforts for areas previously under-served.

When asked about her role as a woman in her work, Nilda confirms that she has often been the only woman at the table, which she sees as an advantage because she could offer an other perspective.[…] And it’s been changing over the past few years. After this overview of the different NYC programs, she answers questions from the audience.

What can we do about this waste culture particularly prominent in NY? Education is the answer: develop individual awareness, appeal people’s consciousness. That is what they did with this recent campaign, showing reminders everywhere after a public survey showed that people just forget about their reusable bag, cup, etc. But it  takes time anyway, change is not going to happen overnight.

Where does the city stand in terms of energy reliability and resiliency? They work with their technical staff to find ways to cut off waste without becoming unaffordable energy providers to people.

As individuals, what are the actions we can take to be more sustainable? Being conscious of  your own energy use. This means installing energy star appliances, switching off or unplugging appliances when unused, etc.

How to deal with food waste? Instead of just throwing food away, leftovers can be sent to home shelters, namely thanks to organizations like City Harvesting. And then, composting can reduce waste amount by even a third of its volume. As for packaging waste, particularly embedded in NYC culture, the city has been working on 1 big bag recycling program to simplify the process. This will be launched in NYCHA housing, which dwells about 400 000 people.

Have you struggled to provoke change in organizations which are not willing to? Usually, it’s not a matter of being opposed to change but more likely to not know the methods. When asked, people and agencies have plenty of ideas.

Nelda tells us that there is an advantage of working in the city, as opposed to federal or state levels, because impacts are more direct, you are closer to experimentation and readable results. As for resiliency, Nilda’s office works on different strategies, namely in Jamaica bay and thanks to huge FEMA funding, for a better adaptability in the case of another storm Sandy coming.