Archtober is Launched! 1st Building of the Day (BoD)

What a great month coming ahead to be an architect in NY! Wednesday, October the 1st, was launched Archtober. This “festival” is a celebration of contemporary architecture all around the city: events, meetings, conferences, exhibitions, but best of all: visits of great buildings with the Building of the Day program!

The first building to come on stage is the Public Theater at Astor Place, presented by Stephen Chu, associate of ennead architects, who worked on the lobby and outdoor space renovation. I’m just posting a few pics, as a complete report has been written by one of the many Archtober organisers, Cynthia Phifer Kracauer here.

The building was a library and first consisted only of this segment. To enlarge the building, this segment was then repeated once, and then twice, with an addition on the top for style and symmetry emphasizing.

Instead of re-introducing the previous balustrade, ennead architects designed this welcoming stoop, with different pace stairs and accessible slope. An additional zone was thus added to extend the lobby outdoor and provide a sheltered stop before entering the theater.

The printed glass marquee emphasizes the entry of this major institution, without blocking the view of the landmark’s façade.

The dark grey floor of the stoop (left) is extended towards the polished and glittering floor of the lobby (right).

There are several theaters in the building; which means a lot of people gathering at peak hours. The challenge for the lobby was to be, and to feel, bigger. The entry stairs were moved outside to win a few square feet. 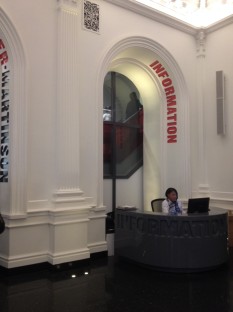 The lateral arches were re-opened and the stairs to the 2d floor moved behind. Those modifications involved huge structural reinforcements, as the arches marked the jonction between historical segments, which means very thick walls. 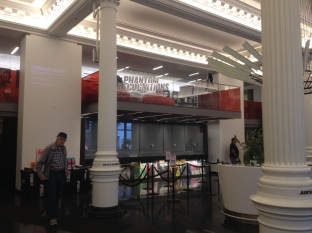 At the location of the ancient stairs coming up, a mezzanine was added to gain space. The ceiling of this mezzanine was of special attention, as it needed to be as thin as possible.

The lighting and colors of the lobby were redefined. A longing element was added to the ornamented beam, to enrich the lighting.

The central digital chandelier, an artwork by Ben Rubin and Mark Hansen, is actually a great source of light.

We also visited 2 of the 6 theaters but the dark rooms pics aren’t worth showing. Actually, the intervention of ennead architects for these rooms was only to add the fire sprinkles system. The building is renovated bit by bit. It is a long process where money rising and political validations take time.

Unfortunately, the renovation of Joe’s bar, next to the lobby, was held by an other firm and features a very different style.